One thing that these Olympic Games have highlighted for me is the fallacy of the notion that we’re all too pushed for time to live the life we really want, and even, possibly, of the cliché that’s life’s too short.

In the past week and a half I’ve watched hundreds of athletes, many whom are only in their mid-teens, who have now achieved their greatest dreams.

It’s made me think about all the time that most of us spend postponing our dreams, talking about all the things we would do if we just weren’t so busy.

But the thing is, most of us really aren’t that busy.

There are lots of things with which we fill our time to make ourselves feel like we are busy. But many, if not most, of those things we could let slide if we were going to use the time instead to work towards our dreams.

There are exactly the same number of hours, minutes and seconds in our days as there are in Katie Ledecky’s – she just uses hers more efficiently. 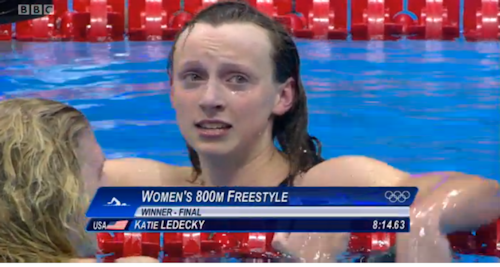 At the tender age of fifteen Ledecky has already achieved her dream of becoming an Olympic champion, and posted the second fastest women’s 800 metre freestyle time ever in doing so.

For most of us it’s more likely that we use a perceived lack of time as an excuse.

But if you just consider the staggering weight of what your fellow humans have managed to achieve throughout history; mostly before the invention of modern labour saving technology, you cannot claim that you do not have the time to succeed.

I think the Olympics also shows up some of our other excuses for just what they are.

That didn’t stop Gary Kikaya of Democratic Republic of Congo, the poorest nation on earth becoming a world-class 400 metre runner. In fact the fastest 400 metre runner the world has ever seen who isn’t American.

The timing isn’t right, you’re life’s too up in the air?

Iraq, Afghanistan, Egypt, Libya, and Tunisia have all produced world-class athletes to compete at the 2012 Olympic Games. Every one of whom could easily have excused themselves from pursuing their Olympic dreams because the last few years have been a really bad time for their whole countries.

Hell, Guor Marial of South Sudan even had the gumption to get himself included as an Independent athlete.

His home country, in its infancy, and having spent two decades embroiled in a civil war before ceding from its northern neighbour, had been too busy to set up an Olympic committee, and so would have been unable to send him.

Not sure you can do what it takes? Other people keep telling you it’s not achievable?

But would you ever have believed that a man with no feet could run in the 400 metres competition at the Olympic Games?

He was determined to be that guy, and he didn’t let anything stand in his way.

Imagine having the weight of expectation of over one billion of your fellow countrymen desperately wanting you to win the race of your life for them.

And then crashing out.

And then summoning the courage to bounce back only to repeat the whole disastrous experience again four years later.

You will never risk experiencing embarrassment on the scale of Liú Xiáng unless you are also striving to be a world-class Chinese athlete.

And it’s never stopped him trying.

Fortunately few of us actually need to become elite, or even beat anyone at anything, in order get to where we really want to be.

A personal best, against ourselves, is all we need – and then we’ll have made it.

And if, when we’ve made some adjustments, we all have the time to make a reality of our dreams – surely life must be just long enough?

10 thoughts on “We Have All The Time In The World”