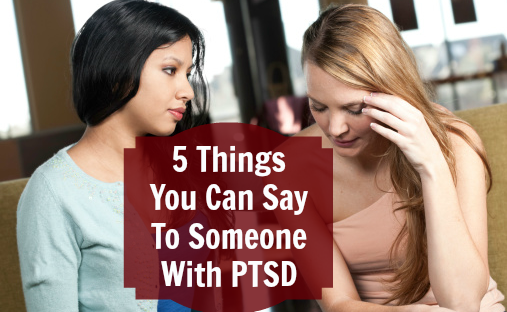 “A friend is someone who knows all about you and still loves you.” ~ Elbert Hubbard

So the other day I talked about some of the things that are unhelpful to say to someone with post traumatic stress disorder. Since I put that post up a few people have asked me what would be some of the right things to say – and even more have arrived here having typed the same question into Google – so I thought I’d better come up with a few suggestions.

Okay, I know I told you that it’s probably best not to ask a person who tells you they’ve been suffering with PTSD what it was that caused it – rather that you should let them open up to you about it in their own time. Here I’m assuming that they’ve already taken that step and that the two of you have the kind of relationship where you’d naturally talk about these things.

If a person starts to open up to you about either their illness or experiences it can be good to ask them if they want to talk some more. This can help on a number of levels.

It reassures the person that you haven’t been put off by their revelation and that you’re willing to listen. It can also let them know that if they’re unready or unable to talk it through with you right now the door is still open, and they can come to you to talk if and when they need to.

Then again some people just flat-out don’t want to talk about it and don’t want to be asked anymore questions. They’ve decided that that’s just not a good way of dealing with it for them or maybe even found that talking makes things worse. That’s okay too, and it’s best that you establish that from the off so that you know not to push them for more information than they’re comfortable disclosing.

It’s okay that they told you about this. It’s okay that this is something that they’re going to need you to support them with and factor into your relationship, from now until some immeasurable distance from now. It’s okay, not that the big bad thing happened, but they are someone who the big bad thing has happened to. It’s okay in the sense that you’re not repelled by it, that it doesn’t lessen them in your eyes. It’s okay because you’re there to help them now and by sharing the burden you’ll both make it easier.

It’s okay, they’re still the person they’ve always been, your opinion of them and your feelings for them haven’t changed, it’s just right now they’re having some bad breaks. It’s okay.

It’s okay not to know what to say. I can’t imagine someone tells you that they have post traumatic stress disorder every other day. It’s not like you’ve had any reason to prepare for this. If this situation is new the person you’re talking to likely doesn’t have a full an idea of what to say either. So just tell them that.

Tell them that you hear them; that you care about them and the things they’ve just said. Tell them that you want to do the right thing by them but that you’re having a little difficulty putting your thoughts into words right now.

It’s good to let the person know where your head is at because one of the, many, unfortunate side effects of PTSD is that it tends to make you paranoid. So if you don’t tell them what you’re thinking their illness might try to convince them that you aren’t saying anything because you have nothing say – that you don’t care, or even worse that you’re judging them for what they just told you and that you don’t feel the same way about them anymore. Best to get in there first before the beast has time to work it’s poison.

4. Is there anything I can do to help? Is there any way we can help you avoid things that trigger your anxiety?

It can be hard for people to ask for help, even after they’ve gone as far as to tell you that there’s a problem. You can make that easier by offering.

If there is anything you can do to minimise the contact the person has with things, situations, or people they find triggering that will be a massive help. Getting them to decide what that is and how you’re going to proceed with this will be good for them also.

Try to make the person feel like they’re in control of the situation. Both the PTSD itself and most of the things that cause it can feel very disempowering. Helping them to feel less helpless is good.

5. Have you watched the new season of House of Cards yet?

I don’t personally know why you would have. With all the hype around Netflix releasing season two I thought I’d give it a go to see what all the fuss was about. I don’t think I managed to get half way through the first season I found it so tedious.

Being caring and supportive is good but aside from that you can still talk to them about the same things and in the same ways that you always have. And by initiating that you will reassure them that your opinion of them hasn’t change and that their revelation isn’t going to scare you off.