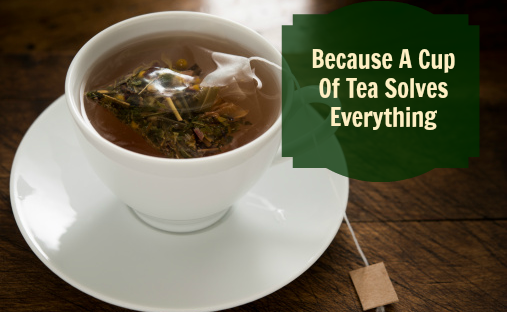 “The very act of preparing and serving tea encourages conversation. The little spaces in time created by teatime rituals call out to be filled with conversation. Even the tea itself–warm and comforting-inspires a feeling of relaxation and trust that fosters shared confidences.” ~ Emilie Barnes, If Teacups Could Talk

I think I’ve mentioned before that I love tea. I drink ridiculous amounts of the stuff, it’s one of the things that people know about me. I’m not a fan of wedding gift lists, I don’t like the way they make present giving so impersonal, so whenever I’m sent one I always hope that there’s a tea-pot on there. That way I can be sure the people I’m buying it for will surely be able to associate the gift with me. So I was very pleased when I moved house a few months ago that I now have the space to devote a whole cupboard, or at least a whole shelf in one way – to my tea collection.

At last count I had fifteen different types of tea, some Cadbury’s drinking chocolate, and a tube of Berocca-type effervescent tabs for those mornings when tea just isn’t going to cut it. There’s usually some biscuits in there as well, but I polished off the last half of the packet about ten minutes before I decided to take that photo.

You’ll notice that there’s absolutely no coffee in there though. I cannot drink coffee; I’d really like to, I think it would sound so much more sophisticated to be a connoisseur of coffee than of tea but I just cannot acquire a taste for it. In fact my dislike for it is so strong that it makes me gag, and even the smell of coffee makes feel nauseous. Which has led to quite a few misunderstandings when I’ve started new jobs. You know how when everyone comes into work early in the morning the first thing that happens is that someone gets a line of morning wake-up coffees going? Well I need my morning cup of tea just as surely as those others need their coffees, but being in a confined kitchen with all that coffee aroma can make me feel quite queasy. So then one or two people will notice that I’m feeling a bit sick; and that it’s the morning. And then they notice that the same things happens the next morning, and the one after. Before you know it there’s a bunch of rumours going around that it looks like the new girl might be pregnant and planning to leave again already.

So to the teas – from left to right we have:

How about you, what’s your must have beverage?

19 thoughts on “Because A Cup of Tea Solves Everything”