I thought I’d have a go at the Weekly Writing Challenge again this week, and tell you about the most meaningful object I own.

I actually own a lot of meaningful objects. Pretty much all the stuff in my house is meaningful, bar the electrical items and similar necessities, because it was either given to me by someone I care about, or it’s there as a memento of somewhere that I’ve fond memories of having been.

None of the items has much material value but my things are incredibly precious sentimentally.

A fine example of this is my fridge. It’s covered in tacky souvenir magnets which pin up some far from outstanding photographs. To the untrained eye it looks a bit of a mess, but to those in the know that fridge has taken on a personality all of its own.

You see, I used to collect paintings, I would bring back at least one from every country I visited. But I quickly ran out of space. So I started collecting tourist’s fridge magnets instead, as they don’t take up much room, either in a backpack or in my home. And then it made sense to use the magnets to stick on photos of my trips.

I love photographs, I have literally hundreds of thousands of them, and I like to have lots of photos of my friends up around the place.

My small, personal  tradition gradually became a ‘thing’. I now routinely get fridge magnets as presents every time my friends go abroad as well. And on nights out, when photos are taken, in much the same way as people used to say, ‘oh that’s got to be your Facebook profile picture’, someone will often say, ‘that’s one for the fridge!’. Those photos do then make it onto the fridge.

In fact the fridge’s purpose as a cooling device is now almost secondary to its service as a monument to my favourite people, and our favourite memories.

But I would have to say that the most meaningful item that I own is a garish blue and green ornament of an owl, which I inherited from grandad.

He was the one who encouraged me to do all the travelling, and photographing, and fridge adorning in the first place.

My grandad is my dad’s father, but it will always remain a mystery to me how they can possibly have been related.

My grandad was everything my dad isn’t; laid back, tolerant, adventurous, inquisitive.  It was he who encouraged me to go out into the world, telling me stories and showing me pictures of all the places that he had been to, and lived in. He’d been in the army during the Second World War, and before we gave the Empire back, so he’d traveled all over the world.

My dad, on the other hand, still cannot fathom why I’ve ever felt the need to stray beyond western Europe, and he and my mum have never placed a single picture on display.

I do not remember a time when the owl was not a part of my life. I remember wanting to play with it every time we used to go to my grandad’s house when I was little, and him making up stories to tell me about what it had been up to since I last saw it. 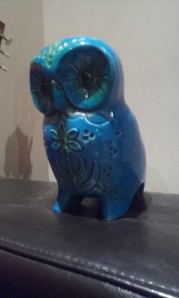 He’d grown up in Sheffield, a few streets away from Hillsborough football stadium, and was a life long Sheffield Wednesday supporter. He used to tell me that this was the owl that Wednesday’s mascot Ozzy was based on. And I believed him, I suppose right up until the day that I collected it from the solicitors, because he was mine and my grandad was gone, and looking at it thought of how it bore absolutely no resemblance to a line drawn insignia.

It took me twenty-six years to work out that he’d been me winding me up. 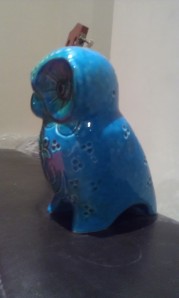 My Ozzy Owl also holds money. When I was little my grandad collected his spare change in it, until no more coins would fit, and then he gave them to me. I used to think I was so rich to have so many coins. We’d play shop and counting games with them all.

When my grandad died the owl was the only thing that I was determined that I wanted, as it was, along with the smell of pipe tobacco and the hat he was cremated in, the only thing I resolutely associated with him.

The solicitor made me check its value to be sure that I could have it, as the estate was to be divided proportionately, so I know that you can buy one of your very own on eBay, for the bargain of thirty quid. It makes for a pretty weird looking ornament really, but, everyone who comes to your home will be sure to comment on it.

You’ll never see my Ozzy on eBay though, he’s absolutely priceless to me.

12 thoughts on “A Few Of My Favourite Things”