I’ve been AWOL again. This time I blame it entirely on Natalie Portman. 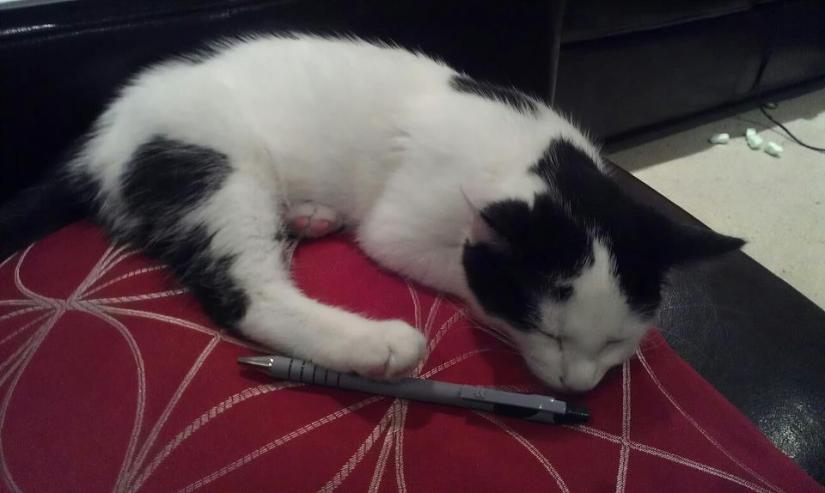 Natalie Portman is the kitten I adopted ten days ago after she was abandoned where I work.

It’s been a bit more of an adjustment than I was expecting. I had a cat when I was growing up, and I mostly seem to remember her sleeping all day.

But she was born when I was only very small myself, so I just didn’t remember the demanding kitten phase, where they want to be played with all the time and think that 5am is a perfectly reasonable time for everyone in the household to be up in a morning. Never mind that there’s nowhere anyone has to be until 10.30.

I’m ashamed to say that the clash between Natalie Portman’s abandonment issues and my commitment phobia actually had me contemplating trying to pass her on at one point last week. Albeit only briefly.

My furniture has had to be completely shrouded in towels to protect it from young Natalie’s claws, especially since she developed an interest in parkour.

She thinks that every piece of rubbish is a toy.

And after I spent a mini fortune today on buying her proper cat toys she’s spent the whole of this evening playing with a plastic plug cover.

Not to mention that she follows me everywhere I go when I’m at home, she’ll only go to sleep if she’s allowed to do so on top of me, and she resents me leaving her for work so much that I’m faced with twenty minutes of strident miaowing every time I come back.

Although her attempts at overcoming her innate fear of water so that she could join me in the shower were quite amusing to watch.

But I think we’re just about settling down and getting used to each other now.

I’ve learned that her absolute favourite thing to eat is sardines.

Or whatever I’m having.

Even if it’s broccoli.

And she’s learned that it doesn’t matter how hard she tries she will never succeed in convincing me that there should ever be more than one five o’ clock in a day.

Or more than one six o’ clock for that matter. I only have a fifteen minute commute to work for Christ sake’s. And that’s on a truly horrendous day.